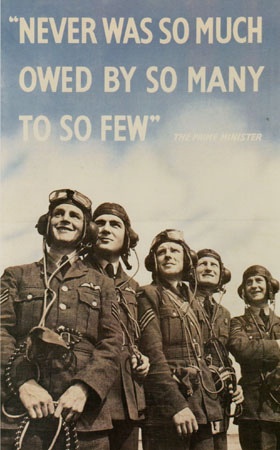 The Few is a term famously used to describe the Allied airmen of the Royal Air Force who fought the Battle of Britain in the Second World War. It comes from a phrase in a speech given by Winston Churchill to Parliament in 1940. Many of these airmen went up in the air with a mere 10 hours training behind them and the high probability of their death ahead of them. They took on the German Luftwaffe that exceeded them in number, in technology and in experience. Chances of survival were incredibly slim, yet they are credited with saving Britain from defeat.

In his speech Winston Churchill said this:

“The gratitude of every home in our Island, in our Empire, and indeed throughout the world, except in the abodes of the guilty, goes out to the British airmen who, undaunted by odds, unwearied in their constant challenge and mortal danger, are turning the tide of the World War by their prowess and by their devotion. Never in the field of human conflict was so much owed by so many to so few.”

And thus, from then on these ordinary people, became the heroes of World War II – valiant men – the Few – remembered for a sacrifice and service that was extraordinary.

Recently it was reported that “Minority rules: scientists find the tipping point.” The research says that “if just 10 percent of the population holds an unshakeable belief, their belief will be adopted by the majority”. It is possible to be one of the few and make a difference in our world!

Don’t underestimate your ability to influence. You affect and impact the people you are around. You can make the difference that your family, your workplace, city and nation so need. You may not see the impact that your showing integrity at work, extending grace in trying circumstances, your behaviour at school could possibly have on eternity but it is there. You never know who is watching. Your help or encouragement of one person may encourage them to do something great for God. Your example may stop someone giving up. The kind word you share may be the catalyst to point someone to salvation.

Small becomes large – a minority becomes a majority when our God is involved.

Dwight Moody said this “The world has yet to see what God will do with and for and through and in and by the man who is fully and wholly consecrated to Him. I will try utmost to be that man.”