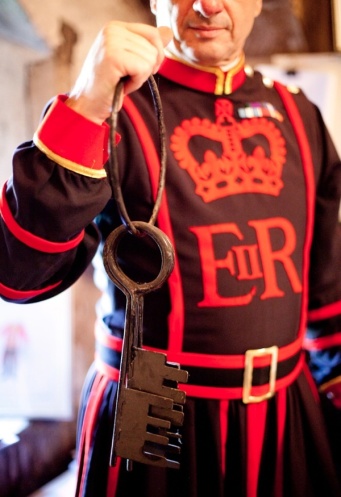 I’ve been locked in the Tower of the London. The very Tower where Queen Anne Boleyn, Queen Catherine Howard and Lady Grey met their fate. These Queens all lost their heads there. I fortunately did not and have survived to tell my tale.

So how did I end up locked in the Tower?

Many years ago I had the privilege of being able to attend the “Ceremony of the Keys.” This Ceremony has taken place every night for the last 700 years. It is when every door to the Tower of London is locked. Finishing precisely at 10pm, the privileged few find themselves officially locked in the Tower of London, auspiciously in front of Traitor’s Gate.

The following script is repeated every night between the Chief Yeoman Warder and a Sentry.

Sentry: “Halt, who comes there?”

At the end of the ceremony, once we’ve realised that the Tower and the Entry gates have now been locked for the night with us still on the inside, we are escorted to a secret side door and fortunately let out. No ominous death as faced the Queens for us!

This Tower is an extremely secure fortress. And so it needs to be! It  houses the British Monarchy’s priceless collection of Crown Jewels! It is very good – extremely good at keeping prisoners in and burglars out!

But we can breakout! And not just through a tiny obscure door!

“For though we walk in the flesh, we do not war after the flesh: (For the weapons of our warfare are not carnal, but mighty through God to the pulling down of strongholds) Casting down imaginations, and every high thing that exalteth itself against the knowledge of God, and bringing into captivity every thought to the obedience of Christ.” (2 Corinthians 10:3-5)

My 20 minutes locked in the Tower was a fantastic experience. But I am glad that it was just as a witness to an amazing ceremony!