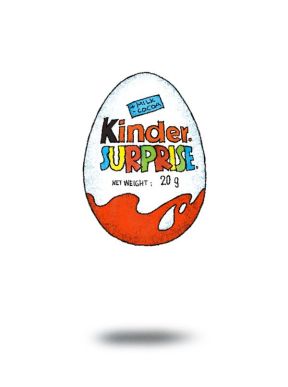 My 3 year old loves kinder surprises. In fact all my boys do. There is much excitement whenever they receive one. And their excitement is not so much for the chocolate egg, although don’t get me wrong, that is very quickly demolished! Their excitement is for the yellow container within the egg and the promise of the toy inside. Particularly at the moment as each egg holds the potential for containing a superhero collectable. The excitement when a superhero toy does prove to be inside is huge.

It doesn’t take a prophetic gift to see the junk in our lives. It does however, require the eyes of God to see broken people like Simon (broken reed) and in the midst of their brokenness, call them Peter (Rock). Most people know what is wrong with them but they are unaware of the greatness that God has placed in their lives.  That is what prophecy does it calls out the greatness. It finds that yellow container with the gift inside of it and brings it into the open.

In Saul’s first encounter with the Prophet Samuel, he says “Am I not a Benjamite of the smallest of the tribes of Israel, and my family the least of all the families of the tribe of Benjamin? Why then do you speak to me in this way?”

The story goes on to describe how Samuel anoints Saul king and tells him that he is going to encounter a group of prophets coming down from the hills. When he joins them, he will be changed into another man. By the time Saul turned to leave, he was changed into another man. He was transformed back into the man that he was designed to be from the beginning. The real man who was hidden under low self esteem and sin was revealed and restored.

Low self esteem has caused many people to lose sight of the greatness that God has place in them. The goal of the gift of prophecy is to bring out the best in people. It is to mine for that gold and find the hidden treasure in peoples’ lives. It is to look past the negative, to prophecy the answer not the problem.

At the end of the day the chocolate egg is long gone, but the toys – well, they are treasured and collected. They’re the real gift.